Archipelago of Stars is out 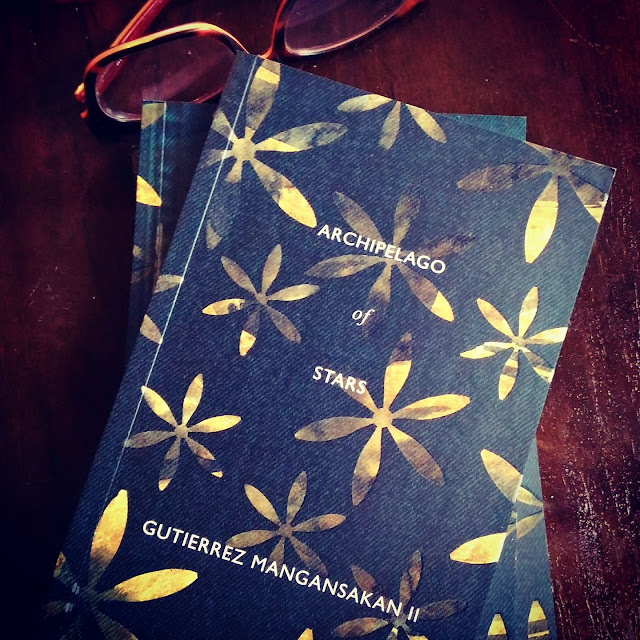 My new book Archipelago of Stars is out. It is a collection of essays which I wrote within a ten-year period (2005-2015). Several of the essays started as blog posts here which I developed in the course of the years.

Victor Dennis Nierva did a fabulous job with the book design. He asked me about the elements that I wanted to include on the cover. I told him I have a penchant for the asterisk. In fact I use it in an unconventional manner that Dr. Cristina Pantoja-Hidalgo took notice of it in my essays during the 2015 UP National Writers Workshop where I was a writing fellow. She was aghast. But an asterisk is a marker of origin. I can call it mine. As a reaction, I wrote in my book's bionote that I "take pride in the deconstruction of the asterisk as his way of rebelling against the formality of political and artistic establishments." What I didn't tell Victor was that an asterisk reminded me of the jackstone stars which I loved playing as a kid. I told him that I wanted a denim texture for the cover to convey a down-to-earth and contemporary feel. It also features Gill Sans, one of my favorite fonts.

In my essay Archipelago of Stars from which the title of the book is derived, I wrote about the origin of my writing life:

“HOW CAN I BECOME A (GOOD) WRITER?” is probably one of the trickiest questions that I have been asked in my life. “Are writers born or made?” ranks closely in second place. The first question denotes the existence of a step-by-step procedure similar to, say, gourmet cuisine, guiding the novice through a logical sequence of actions from mincing and chopping, to sautéing and flambéing, and then continuing to the delicate art of plate presentation. Meanwhile, the second question implies the role of genetics, or the difference one brand of infant formula milk makes in the development of a would-be writer.

I never considered becoming a writer when I was growing up. There was no oracle foretelling what I’d end up to be, although soothsayers have always been inclined to say that I was bound to do great things. I’m okay with the thought, for as long as it doesn’t entail death by firing squad or hanging like most of the great people I encountered in grade school history lessons. I get embarrassed when I’m asked, “What do you do for a living?” I don’t want to be presumptuous by announcing, “I’m a writer.” Then again it’s a more pleasant thing to say compared to admitting that I’m a bum most of the time.

Until recently, when I was asked to speak in a career guidance seminar, I haven’t bothered tracing the origins of my writing life.

Like many children I dreamed of becoming a doctor. When I was five years old I showed an intense fascination with the doctors who looked esteemed in their starched, antiseptic white gowns as they attended to my paralyzed grandfather. However, my mother was so opposed to the idea that she announced it right there and then that she would not hear of me wanting to become a doctor."

Archipelago of Stars is published by the Ateneo de Naga University Press. For another sampling of the essays, click here.

Email ThisBlogThis!Share to TwitterShare to FacebookShare to Pinterest
Labels: BOOKS