"This film is made possible through crowdfunding. Thank you so much for your support." This is the opening text of my new film, moro2mrw, which was shot last March around Mindanao. I never thought that we would be able to make it considering one of our biggest funders thought that making a film on the Bangsamoro was a huge gamble after the Mamasapano incident that killed 44 SAF men and Moro nationalists. With the help of friends, family and the leadership of the Autonomous Region in Muslim Mindanao, we managed. We're now on post-production.

In celebration of National Language Month, writer Edgar Calabria Samar has launched a Facebook campaign to popularize Filipino literature by asking people to post an answer to the question, "What book by a Filipino author have you read this August?" and use the hashtag #BuwanNgMgaAkdangPinoy. 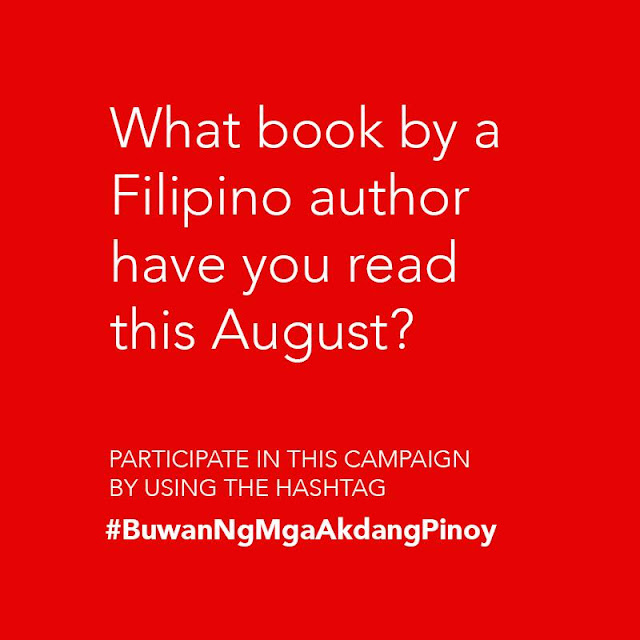 The reality is less than ten percent of my library is occupied by books written by Filipino authors in English and Filipino. The last time I read a book by a Filipino author was May this year, Autobiografiya ng Ibang Lady Gaga by Jack Alvarez, right after the UP National Writers Workshop. Jack and I were fellows this year. I couldn't recall when and which book by a Filipino author writing in Filipino I read before Jack's, perhaps three or five years ago. This should not be miscontrued as lack of patriotism on my part, but distribution in the regions (especially in cities with no National Bookstore branches) has been quite problematic unless you're one of those Precious Hearts Romances writers. I also have a hard time reading Filipino. So excuse me if I only have ten or a dozen books in Filipino, mostly children's books by my friend Luis Gatmaitan and Genaro Gojo Cruz. Whenever I get a chance to be in Manila, it's for film-related business usually so I don't get to check the new titles. The only time I was able to amass Filipiniana was during the Philippine Centennial in 1998. My father was undersecretary of education then and became a recipient of each book that came out to celebrate the Republic and its many heroes. Naturally the books were passed to me, including the thick anthology The Best Philippine Short Stories of the 20th Century edited by Isagani Cruz and the Noli Me Tangere and El Filibusterismo translation by Soledad Locsin. Someday I wish to make a film adapted from the story of Elias and Salome.

I have a few Filipino writers that I read every now and then for pleasure and education. Being a writer of non-fiction, I am a great fan of Criselda Yabes and Marra Lanot (whose De Javu and Other Essays has been a teacher of some sort to me). No one will admit to Jessica Zafra being an influence, at least at one point, in a writer's life. But I do. In the late 1990s, her Twisted anthology showed me how to make something creative out of my angst-ridden youth. I love cats and cinema too. Since the rise (and eventual fall of blogging) other Filipino writers have become quite accessible. It became an opportunity to cultivate friendships, both real and online.

So as for my August read? I'm reading Savor The Word, a compilation of winning entries (including runners-up) of the archipelago-wide Doreen Gamboa Fernandez Food Writing Award, not because I need to console myself with a morsel of nationalism during this time of year. I simply love food, and my cousin Shariff has an essay in the book.