Norte, a new page in history 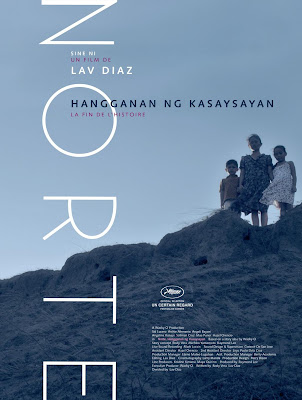 Four Filipino films are in Cannes this year. Un Certain Regard section features Adolf Alix's Death March and Lav Diaz's Norte, End of History, while the Cannes Classics presents a restored version of Lino Brocka's Maynila sa Kuko ng Liwanag. The parallel section, Directors Fortnight, screens Erik Matti's On The Job. All four films have premiered in the Festival. While Matti's opus has cornered the market, it is Diaz's masterpiece that critics are raving about. Pulitzer prize-winning critic Wesley Morris, in his Grantland article, describes his first Diaz encounter:

"Not one of these film professionals seemed terribly compelled to spend four hours in the dark after sitting for 110 minutes looking at a sunless Midwest. It was a warm, sunny day. Best, perhaps, to explore that, instead. But I found myself drifting toward the lobby, anyway, past a woman in a gold-and-cream ball gown who was having her photo taken, and into the theater. Doing this was entirely involuntary in a way that's never happened to me. The festival director, Thierry Frémaux, brought the cast to the stage, including the woman in the dress, then the director, a small stylish veteran named Lav Diaz. I was hoping they wouldn't notice that the house was maybe half-full.

They took their seats, the lights went down, the movie came up, and I sat there. Two-hundred-fifty minutes later, the lights came up, I stood with tears in my eyes, and clapped as loudly as I ever have for any movie in my life. (Note: I've actually never clapped for a movie before.) When Diaz made his way back inside the theater to join the cast, the applause grew, and the whistling and cheering commenced. You always hear Cannes stories of 20-minute standing ovations, but I always seem to miss them. This didn't last 20 minutes, but it was long and special, yet didn't feel remotely adequate thanks for what had just been given to us."
at May 25, 2013