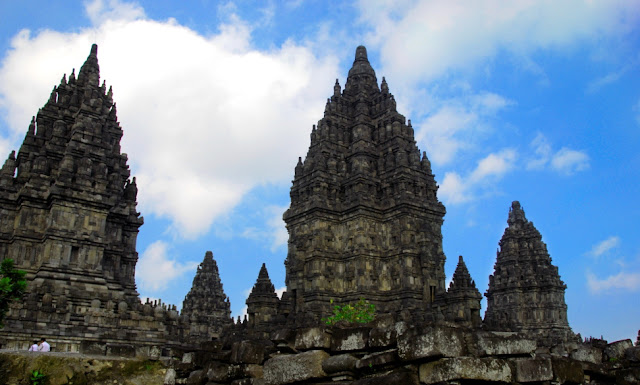 Beyond tall trees, the towering spires of Prambanan Temple slowly come into view. My heart leaps in excitement as the car decelerates before the stoplight. I am in Yogyakarta for a week now. It is my last day. After the frenzy of the film festival which closed last night, my hosts decided that I do what any ordinary tourist do in this city, that is, visit its renowned temples. My flight to Jakarta leaves in four hours, so instead of visiting the more famous Borobodur Temple more than forty kilometers away, we head to the temple ruins in Prambanan which is just fifteen minutes away from the airport.

The light turns green. Our car picks up speed, turning to the left. Before we penetrate the street leading to the site a billboard of a man with striking Arabian features wearing a turban, his mien saintly, and beard bordering his face greets us. Deka points to the billboard and throws a question. “Do you have habibs in Mindanao?”

“A habib is one who claims that he is a descendant of the Prophet,” Deka replies.

“We have those all right, plenty of them,” I retort as our car makes its way to the gate of the temple. After Deka pays the parking fee we enter the vast parking area. Cars are a rarity in these parts as tour buses rule much of the concrete space. We stop in a shaded area. I leap out of the car in eager anticipation.  The sky rumbles, gradually turning into the color of gunpowder. Kristina retrieves an umbrella in the back of the car while Ema takes the box of donuts that we picked earlier in the gasoline station. As we walk to the ticket booth, Kristina turns her attention to Deka and Ema. “When we get close, please do not talk to Teng in English. Be silent for a moment. Just stand there and act like locals.” Kristina explains to me that the entrance fee is different for locals and foreign tourists. Foreign tourists pay double.

Slowly we walk to the ticket booth, eyeing each other in silence as though we are about to commit unspeakable acts of terror. We try our best to suppress a nervous hilarity as Kristina negotiates with the woman in the ticket booth. The woman looks at me with suspicion. For a second I get jittery. Deka gestures to me as he squats on the pavement. My expression turns quizzical. “Javanese people like to squat like this,” he says. Okay, act like a local, so I imitate him. Ema’s body shakes as she tries to contain her laughter. “You are squatting all right, but you are speaking in English. It will still give you away.”

“Ssshhhh,” Deka and I hush her.

Kristina signals to us with the tickets in her hand. We walk to the entrance gate and line up like school children. Kristina hands over our tickets to the gatekeeper who feeds them one by one to a machine. We hold our breaths.  The gatekeeper gives us the green light.

“The woman in the booth asked me if you’re Malaysian,” Kristina tells me after we walk a good distance from the entrance gate. Unable to contain ourselves, we burst out in rambunctious laughter. Excitedly I walk in haste, leaving my hosts behind. Up ahead, tourists snap pictures against what I presume as the temple. I could not see it from where I am as trees line the walkway concealing the ancient structure. Before I could get a glimpse of the temple, a giant billboard explains the restoration efforts in the site. In May 2006, a massive earthquake shook central Java causing huge damage to the temple. Large pieces of debris, including carvings, were scattered over the ground. The temple was closed to visitors until the damage could be fully assessed. The temple reopened its gates several weeks after the earthquake. Restoration continues to this day.

My hosts catch on. I rejoin them. The four of us climb the stairs to the temple in reverent fashion like the drag queens surmounting King’s Canyon in Priscilla: Queen of the Desert. I could actually hear musical score swell in my ear as we inch closer to the temple complex.  I gasp in awe of the colossal structure before me. I am transported to another world.

According to sources, the construction of this royal temple was probably started by Rakai Pikatan as the Hindu Sanjaya Dynasty’s answer to the Buddhist Sailendra Dynasty’s Borobudur and Sewu temples nearby. Historians suggest that the construction of Prambanan probably was meant to mark the return of the Hindu Sanjaya Dynasty to power in Central Java after almost a century of Buddhist Sailendra Dynasty domination. Nevertheless, the construction of this massive Hindu temple signifies that the Medang court had shifted the focus of its patronage from Mahayana Buddhism to Shivaist Hinduism.

A temple was first built at the site around 850 CE by Rakai Pikatan and expanded extensively by King Lokapala and Balitung Maha Sambu the Sanjaya king of the Mataram Kingdom. According to the Shivagrha inscription of 856 CE, the temple was built to honor Lord Shiva and its original name was Shiva-grha (the House of Shiva) or Shiva-laya (the Realm of Shiva).

“Do you want me to take your picture?” Ema volunteers. I shake my head. It is one of those rare moments of rapture that I have not experienced in years. It is like a pilgrimage to a holy site. Taking pictures to capture it seems sacrilegious. I inhale the heavy aroma of the air as I enter one of the temples. I close my eyes as I touch the cold grey stone as though validating this sublime event. I open my eyes. A bull stands in front of me, frozen in time. Carefully I extend my hand to touch its head, imagining what it would be like if it sprung to life.

I emerge from the temple, facing the main temple of Shiva in the middle of the complex. Unlike the other structures, security guards keep watch over the temple. It is surrounded by steel barrier. Badly damaged during the earthquake, engineers and archeologists are working hard to make the structure stable. Tourists can enter the temple provided they wear the protective headgear. My fear of earthquake prevents me from going inside the temple.

I walk to the temple on the right. The walls are adorned with panels of narrative bas-reliefs. “It tells the story of Hindu epic, Ramayana,” Ema briefs me. “I know the story,” I tell her. “How come you know this stuff?” Ema is surprised. “It was part of Asian literature class in sophomore high,” I explain. “We didn’t have Asian literature in school,” Ema laments.

I walk some distance from the temple to admire it from afar. Suddenly I hear the azan, and then another, and one more, like a beacon that signals to everyone that the hour has come. The call to prayer reverberates from all corners of the surrounding areas of Prambanan. Then a thunder roars. I snap out of my revelry. I realize that though Indonesia basks in the glory of its rich multicultural and multi-religious heritage, it is a Muslim country. In fact it is the largest Muslim country in the world.

Kristina calls to me. It is time to go. We walk under the canopy of tall acacia trees. I turn to take a last look at the temple.  The wonder and excitement remain unabated. Then it starts to rain.
at May 11, 2013

Email ThisBlogThis!Share to TwitterShare to FacebookShare to Pinterest
Labels: WANDERLUST